3 Components of Back Pain

“According to a study published in 2013 by the Mayo Clinic, back pain is the third most common cause of doctor visits in the United States. And according to American Family Physician, only 25 to 30% of people seek treatment for their back pain. So if you’re experiencing back pain, you’re not alone.

Many back pain sufferers struggle with what’s causing their back pain, not realizing the 8 or more hours they spend sitting could be the main culprit.

The most common cause of lower back pain is postural stress. For this reason, lower back pain is frequently brought on by sitting too long, prolonged bending, heavy lifting, or even standing or laying down, all for a long time in a poor, rounded back position. According to Cornell University Department of Ergonomics, up to 90% more pressure is put on your back when you sit vs. when you stand. There are several reasons why, the first being that if you’re like most Americans, you habitually sit in ways that cause tension and imbalance in your back and neck. This applies to sitting at work, in the car, and at home.” 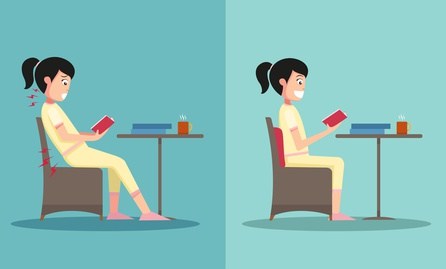 2. Your shoulders are rolled forward. Some of the most common causes are a lack of lumbar support from a chair that’s too soft or one that doesn’t encourage good posture, a muscular imbalance where your pectoral muscles (chest) are stronger than your back muscles (common in men who like to work out their beach muscles more than their back), or habit. If you’re wondering if you’re guilty of this, stand with your feet shoulder width apart and let your arms hang down at your sides. If your thumb points forward, you’re probably balanced. If your palms are pointing behind you, you probably have an imbalance. 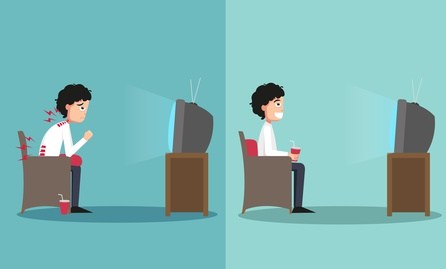 3. You’re leaning forward from your lower back. This posture puts even more pressure on the vertebrae of your lower spine (lumbar area), as it compresses your disks. 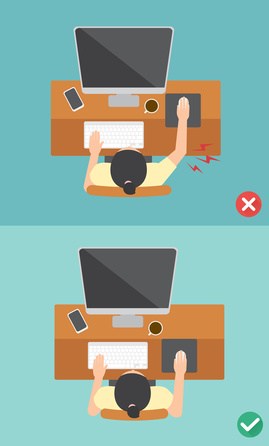 4. Your elbows are too far away from your body. The rule in lifting anything is that the more the object weighs, and the further your elbows are away from your torso, the more strain you put on your shoulders and upper back. Reaching your arms forward to type or write might not seem like much, but doing it 8 hours or more per day will take it’s toll.

5. You hold your phone to your ear.  Many people multitask and talk on the phone while their hands are doing other things. Doing this for a few seconds isn’t going to cause an imbalance in your body, but anything more that that will cause tension on one side of your neck and upper back.

6.You sit for too long.  Dr. Joan Vernikos, former director of NASA’s Life Sciences Division and author of the Sitting Kills, Moving Heals, explains “We weren’t designed to sit. The body is a perpetual motion machine.” When you’re sedentary, your muscles get less oxygen and nutrients from your blood.
The rule of thumb is to frequent changing of postural positions and take movement micro-breaks for every 30 minutes of sitting throughout the work day. A helpful strategy is to drink lots of water: it keep you hydrated, which is healthy, and it forces you to get up and move in order to use the bathroom!

Back Pain Relief4Life is the world’s simplest and most effective way to eliminate back pain naturally… without the need for drugs… surgery… or fancy equipment. It is a lower back pain cure that beats out every other back pain remedy and option in the world for getting a healthy and strong back.

“Hey! What’s going on? It’s Ian Hart here with MyBackPainCoach.com and I wanted to do a quick video about the 3 components of back pain and there’s actually one that is major but it’s not really spoken about often, and so I want to bring that up here. (If you hear music we have people training in the background so you’ll get that part of the video.)

So the first few things that I wanted to cover are the top 3 that I see consistently and often, which are emotional, physical and nutritional, and they are all intermixed to some degree. So, Emotional aspect would be the mental aspect and being conscious of the tension that you have in your body. So if you have constant tension and stress, you know, low feelings like guilt, shame, anger, jealousy, those feelings will build constant stress and tension. They’re actually shown to be destructive to the body, they contract, they cause contraction of the muscles, of the cells, and this can cause tension in the body which can create back pain.

Alright, so wherever your issue is, which typically people have a lot of stress on the back to begin with because of sitting and standing and then build up of tension, will create stress in the back and cause pain.

The next one would be Physical. Alright, so lack of movement, lack of mobility, lack of proprioception – that’s your awareness of your body’s, your understanding of where you are in space; it allows you to touch your fingers to your nose. If your brain doesn’t have an understanding of where the muscles are in the back because there’s a lot of movement and there’s no map from the brain to those muscles, pain will show up. That is what’s great about the body, the body will bring something to you and say “Hey! pay attention to me” and this is one of the reasons why that happens, lack of spacial awareness too. So, there’s a bunch of things that connected into physical and physical actually could be directly connected with nutrition but I made it a different category altogether because there’s a lot of things to go over there.

So Nutrition, if we have a lack of vitamins and minerals. Our back won’t get the nutrients it needs. So for example osteoporosis. A lot of people have osteoporosis of the spine. If you are lacking the nutrients, vitamins and minerals your body will leach it from your bones and then you’ll start to get degeneration of the bone. And that would also happen to the rest of the body, right? Discs as well. And nutrition is also water. We forget that, right? So, vitamins, minerals, water stay hydrated, not eating too much processed food, preferably eliminating processed food all together, alcohol as well. These are inflammatory foods; people who are eating foods that they’re allergic to, many times not knowing that they’re allergic to it. Other inflammatory foods like dairy or processed dairy, gluten and nightshades. If you’re eating those and you have an issue with them they’re causing inflammation. Wherever you have a problem that is in the body will now be exacerbated tremendously. And the last thing that I’ll be speaking about, which is one of the most important things, is toxins. So, before eating foods and consuming foods from cans, fish… we’re building up toxins in the body and we cannot escape it any longer. We’re breathing them in, clothing has toxins, the tags in our clothing have toxins, your seats have toxins, the plastic bottles have toxins, we’re taking on a barrage of toxins constantly, all day everyday, and it’s causing inflammation. It can also cause autoimmune type reactions in the body and if these toxins are not eliminated then they will cause inflammation, systemic inflammation, and again, it can lead to back pain, other joint inflammation, arthritis etc..

So, I also put wifi down there, the electromagnetic frequencies that we’re taking on cause cellular toxicity as well. And so, this is something that you want to keep awareness about. So, how you eat will help eliminate heavy metals as well, and stay away from electrical, you know wifi, toxicity.

So these are a few tips. I’ll do another video on how you can actually eliminate some of these toxins naturally and removing yourself from electronic smog, for lack of a better term. Alright, so this is Ian Hart with My Back Pain Coach. I hope you found this helpful. Look out for another video on how to tackle some of these issues. Have a great day!”