“Hey! What’s going on? It’s Ian Hart here with backpainrelief4life.com. I’m a Back Pain Relief Expert. And today we are going to be speaking about Degenerative Disc Disease.

We see a lot of people with various issues with their back, a myriad of issues coming in all the time from whatever – spine stenosis, bulging disc, we hear it all. I’d say about 20% of the time people come in and they say “Oh, I have degenerative disc disease” and I explain to people that there’s no such thing as degenerative disc disease – everybody has degenerating discs. We want to limit the speed and the rate at which they generate through moving properly, that’s part of what our back program is about. So moving properly is going to prevent you from causing injury to the discs, to the back and therefore, wearing the disc down. We want longevity in the disc. I was very pleased to see that actually Web MD when I was doing a research and just trying to see what doctors say because doctors tell people they have a disease. How do you feel if you’re told you have a disease but you don’t actually have a disease? All of a sudden that changes everything in your mind and think “Oh I have a disease. Now, poor me…  I have a disease that’s the reason why I have back pain.” That’s not the reason why you have back pain and back pain can actually be eliminated and you don’t have to live with back pain.

Web MD says, what is degenerative disc disease? Degenerative Disc Disease is not really a disease but a term used to describe the normal changes in your spinal disc as you age. So instead of a doctor telling somebody “Oh that’s just an aging disc, you have an aging disc”, they’ve gone “oh ,you have degenerative disc disease”. Instead of saying oh that’s totally normal, people think that they’re doomed for the rest of their lives because they have a disease and that they’re gonna live with this disease (Degenerative Disc Disease).

And this weekend, I got to spend about 16 hours with Dr. Stuart McGill. He’s one of the leading, the world’s best spine specialists. He’s a professor at the University of Waterloo and he said something that I really found funny but I also enjoyed because it helps understand if a doctor said something like this to you how would you react. So Degenerative Disc Disease, the doctor might say to you “but what if you saw wrinkles on your face and he said oh you have degenerative face disease because you have wrinkles on your face.” What would you say about that? What would you feel about that? It seems kind of silly that there’s a term called degenerative disc disease when all it really means is that your disc is aging; just like everybody else in the world, if you cut every person open after the age of 50. You’re gonna see that every disc is degenerative to some degree, that’s a fact we know that.

So remember, Degenerative Disc Disease if you were told you have Degenerative Disc Disease, you do not have a disease. You have a normal aging spine. If you have pain in your back, it is most likely do to improper movement patterns. So, what you can do is go ahead and click the link below and get started on the program that can help reverse the aging process, get more blood flow and nutrients to the discs, take pressure off the disc so they stop degenerating faster and therefore get rid of your pain. We created Back Pain Relief4Life specific for that issue. So go ahead and click the link below, you can see other people who have had the same issues, much worse issues than just Degenerative Disc Disease and in just a few sessions they feel great.

So again, this is Ian Hart with backpainrelief4life.com. I hope this helped you out. If you have been told you have Degenerative Disc Disease, you now know that you do not have a disease. So the first step now is to get better, make sure you get rid of the pain and you can start that now by clicking the link below.”

Quick Back Pain Relief Technique For The Sedentary

“Hey! What’s up? It’s Ian Hart here with backpainrelief4life.com and today I’m going to show you a quick technique if you’re sitting down all day and your back starts to get aggravated; how you can take a little bit of pressure off the back and it’s going to help you feel relief right now.

So go ahead and stand up, you’re going to reach up get a firm stance, make sure your pelvis is not torqued or twisted, that you’re in a nice neutral position. You’re going to raise your arms as high as you can, reach for the sky and then take a deep breath into your diaphragm so it raises your rib cage up. So you’re going to breath in real deep and then again and reach, breath in then reach. Make sure arms and back, bring your arms over back and reach up and relax. I want to think about your back when you’re doing this. So again, repeat the process. Remember bring your arms back up and you’re arching slightly back and then taking a deep breath. So deep breath and reach as high as you can, and really feel your ribs raised off your pelvis; and you’re going to feel relief right away. That is just something you can do literally in about 20-30 seconds to help feel relief.

Alright, so this is Ian Hart with backpainrelief4life.com. If you’re suffering from back pain, go ahead and click the link below. Check out our program Back Pain Relief4Life. It’s one of the world’s greatest relief programs. You need no equipment, you only need the knowledge and then you can take yourself out of back pain and prevent it in the future. Go ahead and click that link below.” 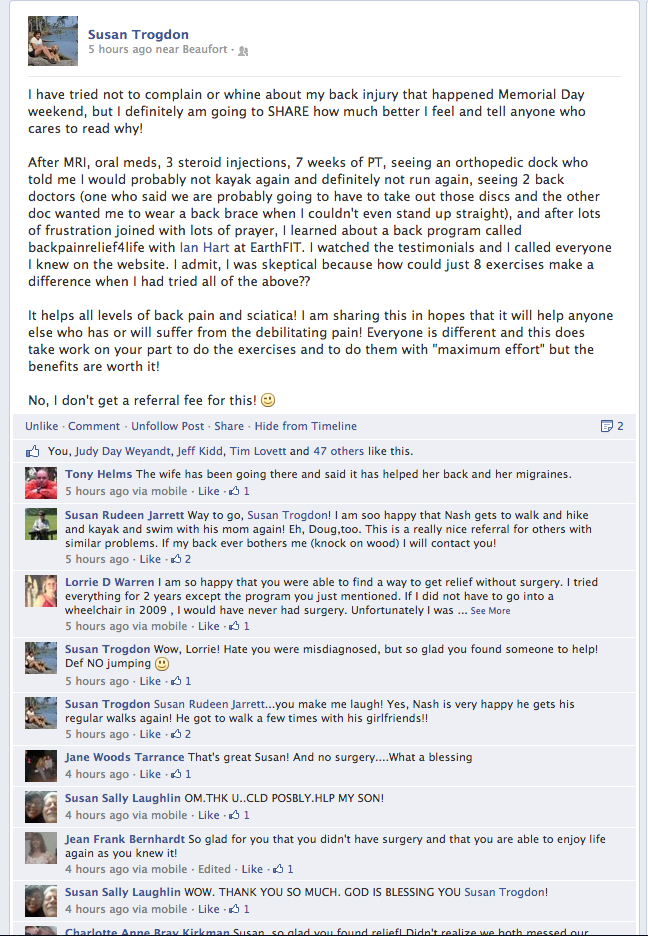 Back Pain Relief4Life is the worlds simplest and most effective way to eliminate back pain naturally… without the need for drugs… surgery… or fancy equipment.

Back Pain Relief4Life is a lower back pain cure that beats out every other back pain remedy and option in the world for getting a healthy and strong back. It is a back pain relief program proven by science and has helped thousands of people across the word eliminate their back pain in an all natural way, all while eliminating hip pain, neck pain, improving sleeping, improving posture, better flexibility, better mobility, improving sex drive, building core strength, back strength and releasing endorphins to get a feeling of euphoria. Back Pain relief for life is a natural medication with only positive side effects. The best part is the cost. It cost less than one co pay at the chiropractor but provides a lifetime of back pain relief from the knowledge you receive.

More than anything, Back Pain Relief4Life is a conduit back to a normal pain free life, so you can spend more time doing the things you love and being with the people you love, free from the worry of the back pain ever returning.